Hello March!! It’s the beginning of a new month and you know what that means? More book releases!! I think March is a pretty good month for me. I got lots of books waiting to be read. Let’s find out what my top upcoming beauties are. 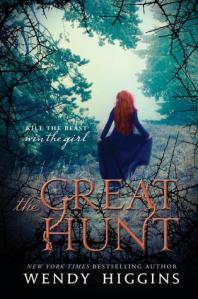 The Great Hunt
By Wendy Higgins

Kill the beast. Win the girl.

A strange beast stirs fear in the kingdom of Lochlanach, terrorizing towns with its brutality and hunger. In an act of desperation, a proclamation is sent to all of Eurona—kill the creature and win the ultimate prize: the daughter of King Lochson’s hand in marriage.

Princess Aerity understands her duty to the kingdom though it pains her to imagine marrying a stranger. It would be foolish to set her sights on any particular man in the great hunt, but when a brooding local hunter, Paxton Seabolt, catches her attention, there’s no denying the unspoken lure between them…or his mysterious resentment.

Paxton is not keen on marriage. Nor does he care much for spoiled royals and their arcane laws. He’s determined to keep his focus on the task at hand—ridding the kingdom of the beast and protecting his family—yet Princess Aerity continues to challenge his notions with her unpredictability and charm. But as past secrets collide with present desires, dire choices threaten everything Paxton holds dear.

I’ve read and reread Wendy Higgin’s Sweet Evil Trilogy and I’m definitely looking forward to see what else she can bring to the table with this new fantasy/adventure novel. I’m seeing the potential of a strong heroine and some unexpected romance. My question is: Will this book live up the Sweet Evil? EIGHT MORE DAYS AND I’LL LET YOU KNOW!

The Shadow Queen
by C.J Redwine

Lorelai Diederich, crown princess and fugitive at large, has one mission: kill the wicked queen who took both the Ravenspire throne and the life of her father. To do that, Lorelai needs to use the one weapon she and Queen Irina have in common—magic. She’ll have to be stronger, faster, and more powerful than Irina, the most dangerous sorceress Ravenspire has ever seen.

In the neighboring kingdom of Eldr, when Prince Kol’s father and older brother are killed by an invading army of magic-wielding ogres, the second-born prince is suddenly given the responsibility of saving his kingdom. To do that, Kol needs magic—and the only way to get it is to make a deal with the queen of Ravenspire, promise to become her personal huntsman…and bring her Lorelai’s heart.

But Lorelai is nothing like Kol expected—beautiful, fierce, and unstoppable—and despite dark magic, Lorelai is drawn in by the passionate and troubled king. Fighting to stay one step ahead of the dragon huntsman—who she likes far more than she should—Lorelai does everything in her power to ruin the wicked queen. But Irina isn’t going down without a fight, and her final move may cost the princess the one thing she still has left to lose.

I think the cover speaks for itself. Just look at it. It’s beautiful. It’s dark, it’s mysterious, it’s on my TBR list. This sounds like my cup of tea. Magic, sword-fighting, attractive male love interest, badass heroine. Yup. I need me some of this. This sounds so damn good. AND IT COMES OUT IN TWO FREAKING DAYS!!

Victor Reuben.
Most sought out divorce attorney in LA.

In such a high profile divorce, they can’t afford any extra drama. Luckily, neither one of them has anything to hide.
Unless you count the mind blowing sex they had…
Once…
Twice…
Three times all those years ago.

As long as they leave the past where it belongs, they’ll be fine. But with her wearing those tight dresses and him giving her those heated glances, keeping their hands to themselves is proving to be more difficult than either one of them realized.

It won’t be long before the paparazzi start to smell smoke, and where there’s smoke…

*deep breath* BOOK THREE. THERE’S A THIRD BOOK. I adored the first two in this new series and once the end of March comes around, I’m going to be digging my teeth into this steamy read! I can’t wait for this gem to come out!! However, I do hope that the author and publisher change the cover to match the other two…I would hate for these books not to match… Other than that, this sounds so freaking good!!

The Black Knife
by Jodi Meadows

Tobiah Pierce has been beaten and broken and has lost two people he cares about. His worst enemy knows his deepest secret. What he thought he knew about his family has fallen apart. And his parents push harder than ever for him to court Lady Meredith. But with the imminent threat of firefly, the newest and deadliest version of a magical drug, Tobiah doesn’t have time to sort through his problems. If he doesn’t act immediately, firefly will suffocate the city and everyone in it.

The Black Knife is the final of four prequel novellas that offer existing fans a deeper insight into a favorite character and the complex city of Skyvale, while new readers will find a stunning introduction to this rich world and the heart-pounding fantasy of the Orphan Queen series.

FINAL NOVELLA. THIS MEANS NEXT MONTH THE ACTUAL SEQUEL IS GOING TO BE RELEASED! I get my fix of Tobiah AND a sneak peek chapter of “The Mirror King”. Jesus Christ. This is gonna be good! I can’t hold in my excitement. I need this NOW. 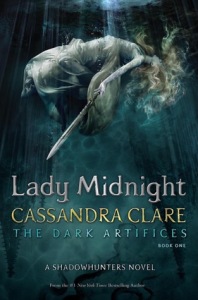 It’s been five years since the events of City of Heavenly Fire that brought the Shadowhunters to the brink of oblivion. Emma Carstairs is no longer a child in mourning, but a young woman bent on discovering what killed her parents and avenging her losses.

Together with her parabatai Julian Blackthorn, Emma must learn to trust her head and her heart as she investigates a demonic plot that stretches across Los Angeles, from the Sunset Strip to the enchanted sea that pounds the beaches of Santa Monica. If only her heart didn’t lead her in treacherous directions…

Making things even more complicated, Julian’s brother Mark—who was captured by the faeries five years ago—has been returned as a bargaining chip. The faeries are desperate to find out who is murdering their kind—and they need the Shadowhunters’ help to do it. But time works differently in faerie, so Mark has barely aged and doesn’t recognize his family. Can he ever truly return to them? Will the faeries really allow it?

It’s here!! The wait is almost over!! And I get to stare at the breath-taking cover until I get my hands on this most anticipated March Release!! With the TV series, Shadowhunters, currently being aired, I’m so excited to enter the Shadow world again! But in book form instead of television form which we all know is SO much better than movies and/or TV shows. Following a whole new pair, I seriously can’t wait to read Cassie’s new series!!

Well that’s all for my March Releases! I’ll be doing one of these every month, so get those TBR lists growing and read ’em till ya weep. (I’m not kidding about the weeping. The feels of a book addict are real and serious). 😛