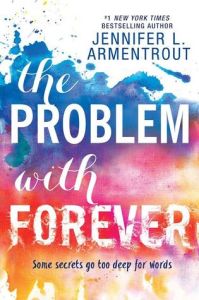 The Problem with Forever
By Jennifer L. Armentrout

Genre: Young Adult, Contemporary, Romance
POV: First Person (Mallory)
Cover Love: The watercolours, the title, the ART.
My Rating: 4.5/5
For some people, silence is a weapon. For Mallory “Mouse” Dodge, it’s a shield. Growing up, she learned that the best way to survive was to say nothing. And even though it’s been four years since her nightmare ended, she’s beginning to worry that the fear that holds her back will last a lifetime.

Now, after years of homeschooling with loving adoptive parents, Mallory must face a new milestone—spending her senior year at public high school. But of all the terrifying and exhilarating scenarios she’s imagined, there’s one she never dreamed of—that she’d run into Rider Stark, the friend and protector she hasn’t seen since childhood, on her very first day.

It doesn’t take long for Mallory to realize that the connection she shared with Rider never really faded. Yet the deeper their bond grows, the more it becomes apparent that she’s not the only one grappling with the lingering scars from the past. And as she watches Rider’s life spiral out of control, Mallory faces a choice between staying silent and speaking out—for the people she loves, the life she wants, and the truths that need to be heard.

Initially, I wasn’t going to read it but after reading a few reviews, I decided why not? It’s a JLA novel. It’s gotta be good. AND IT IS!!

This is the first contemporary novel I’ve read from Jennifer L. Armentrout and what can I say? Her skills in this genre are just as good as the one in her fantasy novels. I mean, of course, she would impress in any form of writing!

The Problem with Forever is the epitome of character growth. The whole way through I was just cheering Mallory on. JLA wrote her character beautifully. I loved the inner voice; she was sarcastic and spunky as hell. It totally contradicted with the silent shield she exerted and that made it all the more satisfying to read.

Use your words. My toes curled up against the soft leather soles of my flip-flops and my throat felt scratchy as I forced the words out. “I’m…I’m new.”

There! I did it. I spoke. Take that, everyone! Words were totally my bitch.

Mallory, aka Mouse to Rider, faced traumatic events in her last foster home. As a survival mechanism, she learned to be silent. This would transfer into young adulthood, until a pair of doctors adopted her four years ago: Rosa and Carl. Through extensive therapy, Mallory is learning to “use her words” and finally ready to move on to the next chapter in her life: high school. For her final year, she never expected to cross paths with someone from her past again. From the very first page, Mallory pulled me in with her snark and her internal monologue. This feature was probably my favourite part about the book. Mallory makes these comments of encouragement and it’s so so sweet and I love her and her willingness to grow for the better. These inner monologues/comments allowed me, as a the reader, to fully understand the capacity of Mallory’s silence and her strength to overcome that. The memories that correspond to Mallory’s immediate response to be silent that made me sympathize and adore her when she fought to break the grip her past had on her. I fell head over heels in love with Mallory’s strength and courage to continue to overcome her silence.

You know who else I fell head over heels in love with? Rider Stark. Oh my lord, praise Jesus above for this character. That moment when Mallory realized Rider was at the same school destroyed me. At the first few pages, my emotions were already being eaten at. It was gonna be good. That scene is probably my favourite yet. It was like witnessing two stars colliding; like two souls finally connecting at the right time and place. JLA did a brilliant job writing the atmosphere of this life-changing moment. It was right then and there I knew I was going to enjoy this novel to the fullest.

Rider is a crucial part in Mallory’s past and I think especially for Mallory to overcome that past, she needed to see Rider again. Ah! Rider is so sweet and scarred. I loved seeing him with Mallory and how he makes Mallory stronger and happier and vice versa. Rider and her lived in the same foster home and he protected her ever since they were young. Four years before, they got separated when Mallory got adopted by Rosa and Carl (and more happened but I won’t spoil that part). Rider resumed his protectiveness and selflessness when they reunited, and boy, does that lead to some heavy angst. He is an amazing artist, and seems to be the uncaring bad boy, but actually is a guy who couldn’t love himself because if people didn’t believe in him, why should he? Although we don’t learn about Rider’s own scars until later in the novel, we do see remnants of this idea scattered in the novel. Once the bomb drops, everything comes together and IT ALL MAKES SENSE. So many feels.

He was staring at me in a way I wasn’t exactly accustomed to, but that I’d seen before. It was the way Ainsley’s boyfriend stared at her. Maybe not as familiar, but definitely as intense.

Along with the amazing character development, the romance in this novel was…just…superb. I was cooing, fawning and just melting into a puddle of goo because of Rider Stark. I would sell my left kidney to witness the way he looks at Mallory. I would give my other kidney if I got one of his stares! It was an amazing progress with these characters’ relationship. There is a girlfriend involved, and we have some awesome support from Ainsley, Mallory’s best friend who cheers her on and pushes her out of her comfort zone, and ultimately supports Mallory and Rider. All this adds to loads of steamy angst. Hell, I could live off of the angst alone. And when they finally got together?! It was ADORABLE! *sigh* 😍

Even though most of the novel was amazing, I had a few itty bitty problems with the story, dealing with plot and character relationships. Overall, the plot moved at a nice pace and all was written very well. The plot twists were effective , but I felt this book was more directed in the significant stages of growth from our characters. The ending was very fulfilling as we do get an epilogue and it is a [spoiler] happy ending. It is, to an extent, open-ended but I’m sure most readers were left very satisfied. So what peeved me off?

A) Carl, you little a-hole. I don’t like you. You need to calm down. When Mallory suggested that she wanted to go into social work instead of medical research, Carl completely tore her apart for even considering it. *cries in anger* And then a few number of things he does through the novel that really got me angry.

B) JLA pulled the stupid, “I’m breaking up with you for your own good” card. I despise that cliché so freaking much I couldn’t handle it. Nope. Not having it. At the time. Because then we realize about Rider’s inferiority and it lead to Mallory’s tear-jerking speech and JLA smoothed it over rather nicely (probably for people like me who hate that take on relationships just to throw some obstacles in there. *knowing look at JLA* I know what you did). She expertly soothed my wounds because I only ticked off half a star for it.

C) Near the end, I found myself finding it hard to relate with Mallory and to understand her thoughts. I get that that what Carl did wasn’t okay and that she had to stand up to her parents, but that whole scene felt odd to me, and I felt sort of detached from the whole story for a bit. Strangely enough, it was only for a few chapters, and then once Mallory’s speech started, my head was back in the game.

Forever was something we all took for granted, but the problem with forever was that it really didn’t exist.

The Problem with Forever is a highly recommended novel with characters that you can’t help but root for for their happy endings. It was a pleasant surprise and I’m glad I didn’t ignore this memorable novel. Mallory’s voice will surely suck you in, and Rider’s intensity will enamor you. This novel addresses many subjects like gang violence, adoption, abuse, blindness and situations that ultimately questions the meaning of forever. I did rate this 4.5 but this absolutely deserves a whooping 5 stars.

11 thoughts on “Review: The Problem with Forever by Jennifer L. Armentrout”