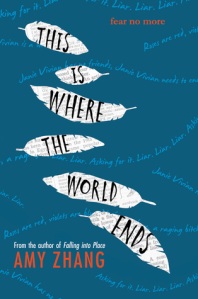 This is Where the World Ends
By Amy Zhang

Janie and Micah, Micah and Janie. That’s how it’s been ever since elementary school, when Janie Vivien moved next door. Janie says Micah is everything she is not. Where Micah is shy, Janie is outgoing. Where Micah loves music, Janie loves art. It’s the perfect friendship—as long as no one finds out about it. But then Janie goes missing and everything Micah thought he knew about his best friend is colored with doubt.

This was one of those books where I kinda jumped in without reading the blurb. Now, that I’ve finished, I’m kinda iffy about it. This novel was very elusive. I found it very hard to follow what was happening but the writing was so poetic that there was a certain elegance to it that just kept my eyes glued to the pages. It was actually rather frustrating loving the writing while being completely taken aback by the plot, the characters, and the messages. And I mean taken aback both positively and negatively.

Picking this up, I was looking forward to another Amy Zhang novel. Her debut novel, Falling Into Place was a novel I absolutely adored. It was amazing. The creative ways she expresses her opinions on certain subjects was kinda amazing, and she does transfer this into This is Where The World Ends. This novel tackles heavy subjects like rape, depression, suicide, PTSD, memory loss due to trauma, along with friendship and independence. The lyrical, poignant way Zhang addresses these subjects just heighten my frustrations (and admiration for this novel).

Both Janie and Micah just pissed me off. More so Janie than anything., but I was moody nevertheless. Janie. Oh, Janie. This character made this novel very unpredictable for me. In the beginning, I could not stand how Janie treated Micah, who is apparently her “friend”. FYI. That is not how you treat your friend. This friendship is pretty much behind closed doors where at school, Janie ignores Micah and forces him to hide his friendship with her. Wasn’t okay with that. Next, she obviously knows Micah has feelings for her and makes it very obvious by the way she manipulates him because of his feelings for her: she dates a wrestler and flaunts her relationship right in front of him. *facepalm* And you guys have such a great friendship right?? But her voice and her personality was so quirky I couldn’t help but also really like her at the same time. This character had flaws and that gave the novel truth. Then, Amy Zhang threw me under the bus by putting Janie through some really horrible shit. What happened after that? Janie had my sympathies, and I suddenly understood why she was acting this way and the depth of how troubled she was.

“I miss you.” I say, accidentally/not accidentally out loud. Miss, present tense. I’m sitting here and I can still feel the distance between us, just folded and crumpled and tangled. Our soul has stretch marks.

Wanted: stretch mark cream for the soul. The stuff that actually works, not the telemarketing crap.

What hurt even more was reading in Micah’s point of view where he blindly allows Janie to treat him like that and pine for her in a way that was very close to the puppy dog love that I really can’t stand. Furthermore, his POV had a mysterious effect as his perspective is in the future after Janie’s disappearance and he has no memory of what happened where Janie’s POV is before her disappearance. Reading the story simultaneously like that really enhanced my reading experience. He went through a significant character growth through the series of events leading up to the reasons behind Janie’s disappearance. I really appreciate how well Zhang wrote about his struggle but I also didn’t appreciate the naivety, despite the solid reasons for it.

See why I’m so frustrated?! Writing is amazing while characters were problematic. On the subject of writing, on top of the Before and After dual POV, we also get Janie’s journal entries. Even though, these helped readers to get into Janie’s head through her stories based on her life, for me, it was too much to handle in order to really understand what was going on. I couldn’t quite get the message in the journals, individually, but I did receive the main idea as a whole.

Plot was very well done and realistic. It did trap my attention for the most part but I found myself skimming some parts that felt like filler scenes and rather boring. The blurb is slightly deceptive because Micah is solving the mystery of his best friend’s disappearance because he lost his memory and cannot remember what happened to Janie, although the reader and the characters can guess what happened to her. (When it actually hits him, it was so well written, I was breathless.)

The ending was very open ended. Maybe too open ended. I would have liked to know what happened to Micah and Dewey but it was very promising and bittersweet. You can evidently see the development of Micah’s character and how real this was to him. His reactions were real. His memory loss was within reason. The progression of solving this mystery in the eyes of Micah was superb, and with the added POV of Janie made the reveal very forceful.

This Is How The World Ends is a bittersweet novel through the minds of distraught characters and shitty situations that happen to everyday people. It created an image of devastating reality that ensures readers understand the extent of tragedy. Although I wasn’t completely happy with the novel, I can state with the utmost certainty that combined with moving and elegant writing and the dark subject matter, this makes for a good, emotional read.

5 thoughts on “Review: This Is Where the World Ends by Amy Zhang”