This October, I have much better luck with book releases as I have 5 instead of the sad 3 last month. 😂 At the same time, I didn’t make a single dent in that list or my TBR in general, so this is one step closer to going to an asylum as I crazily run around and sob over my overbearing list of TBR. (But that is the book nerd life so I’m proud at the same time…) Yes, I’m conflicted.

This is a big month in the YA world as 3/5 of my Most Anticipated are the conclusions of much loved trilogies!! So, it’s a rather bittersweet October as I’m full of happiness and excitement but I’m going to be super sad it’s over.

Let’s check out these beauties! 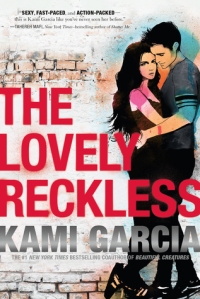 The Lovely Reckless
By Kami Garcia

Seventeen-year-old Frankie Devereux would do anything to forget the past. Haunted by the memory of her boyfriend’s death, she lives her life by one dangerous rule: Nothing matters. At least, that’s what Frankie tells herself after a reckless mistake forces her to leave her privileged life in the Heights to move in with her dad—an undercover cop. She transfers to a public high school in the Downs, where fistfights don’t faze anyone and illegal street racing is more popular than football.

Marco Leone is the fastest street racer in the Downs. Tough, sexy, and hypnotic, he makes it impossible for Frankie to ignore him—and how he makes her feel. But the risks Marco takes for his family could have devastating consequences for them both. When Frankie discovers his secret, she has to make a choice. Will she let the pain of the past determine her future? Or will she risk what little she has left to follow her heart?

Do I spy a bad boy with my little eye? This sounds really really good!! I think fans of Simone Elkeles, and Katie McGarry would love this book and because I am of fans of those very authors, I’m putting this on my Most Anticipated this month. Marco sounds like my type of book boyfriend so I’m expecting to be falling in love in 4 days. Also, that cover is like none other, where the characters are drawings; I love the watercolour effect that goes with it too. 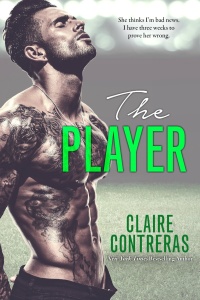 The Player
By Claire Contreras

I’m naturally gifted on the field and between the sheets. With flashy cars and enough media attention to put the Royal Family to shame, I’m the definition of Most Eligible Bachelor.

From the moment I lay eyes on her, I know I have to have her.

She wants to keep me at arm’s length.
I want her naked in my bed.

She thinks our worlds are too different.
All I want her to think about is screaming my name.

I have three weeks to prove her wrong.

Gotta love for Claire Contreras so of course this would be an Anticipated release!! I also did a cover reveal for the book, so I guess I’m bias?? 😛 I see another bad boy in my future, guys. 😉

The Black Key (The Lone City #3)
By Amy Ewing

For too long, Violet and the people of the outer circles of the Lone City have lived in service to the royalty of the Jewel. But now the secret society known as the Black Key is preparing to seize power.

And while Violet knows she is at the center of this rebellion, she has a more personal stake in it—her sister, Hazel, has been taken by the Duchess of the Lake. Now, after fighting so hard to escape the Jewel, Violet must do everything in her power to return to save not only Hazel, but the future of the Lone City.

The first of the finales this month, and it’s not looking good for me as I have completely forgotten what happened in the previous novel. I’m going to have reread or find a trusty recap online. I’m hoping EpicReads is going to write one actually… Been with this author since her debut, The Jewel and I’ve been caught in her wonderful writing and story ever since. I’m curious to see where she’ll take this story.

NOTE: I love these covers so much and they are going to look fabulous on my book shelves when I binge buy these!!! SOOO FREAKING GORGEOUS. 😍

The Midnight Star (The Young Elites #3)
By Marie Lu

There was once a time when darkness shrouded the world, and the darkness had a queen.

Adelina Amouteru is done suffering. She’s turned her back on those who have betrayed her and has achieved the ultimate revenge: victory. Her reign as the White Wolf has been a triumphant one, but with each conquest her cruelty only grows. The darkness within her has begun to spiral out of control, threatening to destroy all that she’s achieved.

Adelina’s forced to revisit old wounds when a new danger appears, putting not only Adelina at risk, but every Elite and the very world they live in. In order to save herself and preserve her empire, Adelina and her Roses must join the Daggers on a perilous quest—though this uneasy alliance may prove to be the real danger.

AAHHH!! FINALE IS HERE FOR THIS WONDERFUL ANTI-HERO!! Marie Lu created the best character that truly struggles with the darkness within. I can’t wait to read this and to get back into Adelina’s head and her world. Who will persevere in the end???

Alexis Morgan has spent the past six years devoted to turning her tiny start-up into Manhattan’s premiere wedding planning company, The Wedding Belles. Now that her business is thriving, it’s time to turn towards her much neglected personal life, and Alexis approaches her relationships like she does everything else: with a plan. Not a part of that plan is Logan Harris, the silent partner in the Belles, and the one person who’s been there for her since the very beginning. But Alexis needs someone fun, and Logan’s all business, all the time—except when a late night at the office ends with an unexpected kiss that leaves the usually cool and together Alexis reeling.

Logan has lusted after Alexis since the day he walked into the tiny Harlem apartment that used to double as her office. But the ambitious wedding planner has always been untouchable…until now. Alexis has made it clear that she’s on the dating market—and equally clear that he’s not in the running. But when Alexis finds herself in need of a date for her sister’s last minute wedding in Florida, Logan knows it’s the perfect time to show Alexis that there’s more to him than numbers and spreadsheets—and beneath the pinstripes and glasses lies a hot-blooded heartthrob. As Florida’s sultry days turn into even hotter nights, Logan’s out to convince Alexis that the fling of a lifetime could just maybe turn into forever…

I’m so ready to read about this couple. Like you don’t even understand how torturous the wait has been and LL made sure to release this trilogy in the span of three months so it’s not even that long. THIS IS IT PEOPLE. WE GET OUR BELOVED ALEXIS AND LOGAN NOVEL. *time for the ultimate swoons*

With conclusions, and contemporary writing, I’m in for an emotional October. How many times will my heart break???

What is on your TBR this month?? Anyone also waiting for the conclusions of the trilogies I mentioned above???

6 thoughts on “October 2016: Most Anticipated Releases”