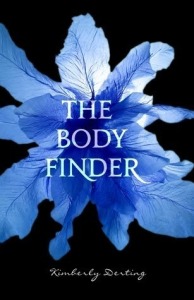 Violet Ambrose is grappling with two major issues: Jay Heaton and her morbid secret ability. While the sixteen-year-old is confused by her new feelings for her best friend since childhood, she is more disturbed by her “power” to sense dead bodies—or at least those that have been murdered. Since she was a little girl, she has felt the echoes that the dead leave behind in the world… and the imprints that attach to their killers.

Violet has never considered her strange talent to be a gift; it mostly just led her to find the dead birds her cat had tired of playing with. But now that a serial killer has begun terrorizing her small town, and the echoes of the local girls he’s claimed haunt her daily, she realizes she might be the only person who can stop him.

Despite his fierce protectiveness over her, Jay reluctantly agrees to help Violet on her quest to find the murderer—and Violet is unnerved to find herself hoping that Jay’s intentions are much more than friendly. But even as Violet is getting closer and closer to discovering a killer.. she might become his next prey.

I’ve read this book so many times, and it never fails to bring me the feels.

I first picked this book up when it first came out, and five years later, to this day, I still reread it and love it all the same! (Can’t believe it has been five years!!

) With that being said, it was time to review and critique it from an older-me point of view.

The one thing that attracted me to this book was the original take on paranormal abilities. Violet, the main character, can sense the dead, but that wasn’t all. There are specific, unique imprints that she calls “echos” that connects the body to the killer. Vi describes these imprints as smells, sounds or colours. The echos can be a combination of the three.

Vi can catch killers because she can connect the echo the dead body leaves to the killer. This means MYSTERIES!! I love mysteries and what’s better than a teenager solving murders?

(Am I the only one getting flashbacks of Nancy Drew??)

Violet is a very reserved character. She does things without thinking and is kinda reckless. She has a small group of friends and is very adventurous. She’s also a kultz. All the things I’ve mentioned describes who I am. Vi was very relatable to me then and now. She is one of the reasons why I continue to read this book over and over again.

I also continue to read this book because of the chemistry and romance between Vi and Jay. Jay is Vi’s guy best friend. They’ve been good friends since childhood and he’s the perfect example of the perfect book boyfriend. He, all of a sudden, hits puberty and becomes insanely attractive. He’s protective and caring towards Vi and at one point in the novel, Jay is jealous and finally snaps and admits his feelings for Vi. (A little bit of jealousy is my kryptonite

) Jay is an all-round perfect male character. (He does have flaws obviously but he’s practically perfect in my eyes *swoon*)

These two act out my fantasies of ending up with a guy best friend and is the root of one of my favourite (yet cliché) trope. They are perfect for each other and balance each other out. They’ve also known each other since forever so they know each other so well. In a book, you can get away with the fact that coincidentally both the guy and girl have feelings for each other, but in real life, that is not always the case. The Body Finder is like a guilty pleasure for the typical and stereotypical happy endings that all fangirls and book nerds LOVE.

The characters are great and so is the plot. The main conflict is that there is a serial killer in Vi’s town and he targets young, beautiful girls. Because of Vi’s ability, she is the only one who can successfully catch the killer. She also happens to be the daughter of the police chief, and her dad does know of her abilities. It’s not as easy as it sounds. There are many twists and turns and the events leading up to the arrest of the killer caused extreme anxiety. The novel kept me interested and there really isn’t anything I can complain about. The Body Finder definitely ended with a bang.

Also, there were chapters in the killer’s perspective and that was brilliant and amazing to read. I loved this part of the book. It created suspense and anxiety and anticipation. Well done on your part, Kimberly!

I want to further mention the writing of this book. The writing was gorgeous and had a very nice flow to it and all in all, this book is amazing!

If you liked this book, I recommend the Shadow Fall series I mentioned above, The Darkest Powers trilogy by Kelley Armstrong, and the Wake trilogy by Lisa McMann.

The Body Finder is a great juvenile read for those starting in the romance/action genre. This novel has a great balance of mystery, thriller, and romance. I will forever recommend this book. The many rereads speak for themselves.

Note: really, really old review. Damn, can you tell difference between the reviews then and now?! 😮 Geez, fetus Michelle reviewing. 😛

10 thoughts on “Review: The Body Finder by Kimberly Derting”